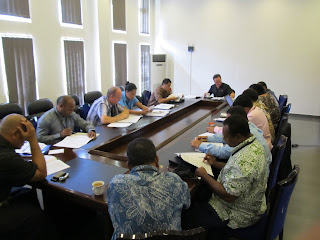 Don’t rush to do Deep Sea Mining in the Pacific. Haste Brings Waste!

Let me take this opportunity to thank the sponsors of the Second Regional Training Workshop on Deep Sea Mining Law and Contract Negotiations.
I thank the European Union and the Ocean and Islands Program of the SOPAC Division of the Secretariat of the Pacific Commission to facilitate this workshop. I would like to express my special thank you to Hannah Lily, Vira Atalifo, and those who made it possible for me to travel to Tonga at such a short notice. I would also like to take this opportunity to thank Helen Rosenbaum for nominating me to represent the civil society in Papua New Guinea to attend this workshop. Last but not the least a big thank you to my family for allowing me to represent my people at this training.
Introduction
This Summary Report outlined the kind of experience I gained from the workshop.  It points out the lessons learnt, the benefits achieved, setbacks encountered and a few recommendations to help the organising committee improve in the planning for the coming workshop.

This workshop helped me learn how to negotiate on behalf of the civil society with the government representatives and the Deep Sea Mining Company.  It also empowered me to learn more on Deep Sea Mining Law and Contract Negotiations in general.  The mock exercise actually gave me a fair idea of how it is actually done in real life situation.  I also gained additional skills, knowledge and lessons from other presenters.

Some of the key lessons learnt from this workshop include the question I paused to Mary Louise Viteli about the right for all citizens to know about the Content of the Contract Agreement between the State and the DSM company (Nautilus) in this case.  She pointed out that all citizens have the right to know about that and that the State should make it public.  I flag her comments to the representative of the PNG’s Solicitor General’s Office who attended the workshop as a reminder.  I believe this was captured very well by the East Timor nation as shown in the television documentary produced by ABC’s Four Corners in Timor Leste.

This small island nation truly proved to us that they have a fighting spirit and would not sway or be swayed by multi-billion corporate entities such as Woodside and ConocoPhillips to agree to their terms and conditions.  They stood their grounds and argued that they get the fair share of the revenue from their petroleum industry.  They also pushed hard to ensure that the pipeline be connected to their island nation.  They were able to prove to Woodside through a local company Timor Gas and Petroleum that that was possible as proven in the bathometric studies of the sea floor.

They even went against the recommendation by World Bank and used the money from their Sovereign Wealth Fund to build and improve their health, education and agriculture services.

A key lesson to learn from that video documentary is that they relied on no one but on themselves for the best advice.  This may not be literally true but goes to say that at the end of the day, whatever decision we make should be good for our country and our people based on sound and independent technical advice or evaluation report.

Another lesson I picked up from that video documentary was that they had a bigger fight ahead of them and that was the need to collect all the tax due to their nation from the petroleum companies operating on their land.

In addition, mining companies and the respective government representatives, International Seabed Authority and key speakers from SOPAC gave us a clear and in-depth knowledge and understanding of issues dealing with DSM laws, geology and the DSM technologies.  I now have a fair knowledge of deep sea minerals, how mining companies carry out exploration activities in the sea floor, what kinds of equipment they use, the money used to do their work and the risks involved.

The KIOST’s presentation showed us clearly how they will use their technology to mitigate risks particularly in an event the slurry pipe breaks midway up or down in the ocean.  However, I am not happy with their plans to pump the waste back to the sea.  Neptune also emphasized the process of taking small steps one at a time to ensure that their activities do not cause negative impact to the environment but did not show us the kind of technology they plan to use in DSM.  Nautilus’s presentation showed part of a equipment left in the sea which was found some years later when doing the exploration in the same area.  This is not a good sign and an indicator of careless work attitude.

This workshop helped me gain more knowledge about deep sea mining, contract law and techniques for negotiation.   I learned about the geology of the earth and the deep sea minerals from Akuila Tawake’s (SOPAC) presentation which was also complemented by Jang Wan Bang’s (KIOST) presentations.   I must also commend Nautilus, KIOST, and Neptune for taking a due diligent process in dealing with the DSM industry.  Speaking to Jang Wang Bang, he pointed out that they will operate within the laws of the State.  That once again brings to attention the need for all Pacific Island nations to ensure that all their Laws, Procedures, Policies, and Strategies MUST be in place prior to issuing exploration and exploitation licenses to DSM companies.  We cannot totally blame DSM companies if we fail to do our part.  As a civil society representative, I am happy that I was able to get our precautionary principle and due diligent messages across to the rest of the participants.

The Pacific- ACP States Regional Legislative and Regulatory Framework for Deep Sea Minerals Exploration and Exploitation and the Precautionary Approach In A Deep Sea Mining Content reports,
should have been sent out to all the participants a month early and not a few weeks before the workshop.   That would give us sufficient time to read and also gauge the views from other stakeholders prior to attending this workshop.

I recommend that SOPAC should send us key documents in advance – a month or two leading up to the workshop.  This will give us ample time to gauge views from other members prior to attending the workshop.

I call on all Pacific Island nations to follow the due diligent and the Precautionary Approach in DSM.  We MUST not rush into DSM as we are not living on life support.  We are a resilient breed of people who have sailed our open seas with sailing canoes and without compass, climbed the tallest and rugged mountains on bare foot, and swam across fast flowing rivers and lakes full of crocodiles, snakes and other dangerous wild animals without safety gears.  Not even the mosquitoes were able to wipe us out of the face of the earth.  We lived off our seas, rivers, lakes and oceans using rudimentary tools for more than 50,000 years.  Who said we will die now if there’s no deep sea mining.  Our land, sea, air and water is our life.  Caution: Don’t Rush. Haste Brings Waste!